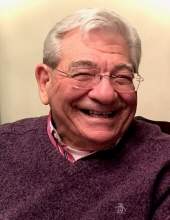 Richard Anthony Sances, Sr., age 83, of Oak Ridge, TN passed away Friday, September 10, 2021, at his home. He was born in Boston, MA, October 20, 1937, to Paul M. Sances and Mary Grace Farina Sances. Richard is a veteran of the US Army, serving three years in the Army Security Intelligence Command at Arlington Hall Station. He began his career at the State Department, then Naval Sea Systems Command, in Indian Head, Maryland. He was employed there 31 years until his retirement as the deputy director. Richard will be remembered for his humility, love of family, and devotion to his faith. He was a kind man who trusted in God and loved his family and his country. Richard is sadly missed by his wife of 58 years, Jean Coleburn Sances; beloved children, Regina Volman of Richmond, VA, Dr. Richard Sances II and wife, Dr. Andwylynn Crabtree Sances of Oak Ridge, TN, and Amy Elizabeth Sances of Richmond, VA; grandchildren- the joy of his life, Coleburn, Olivia, and Peyton Volman of Richmond, VA and Virginia C. and Richard Sances III of Oak Ridge, TN; brother, Matthew Sances; sister-in-law, Patricia Sances; sister, Mary Sances all of Boston, MA; as well as 24 nieces and nephews. In lieu of flowers, donations may be made to the American Diabetes Association at P.O. Box 7023 Merrifield, VA  22116-7023 or www.diabetes.org. A mass of interment will be held 11 am Thursday, September 16, 2021, at St. Mary’s Catholic Church in Oak Ridge, TN.

To order memorial trees or send flowers to the family in memory of RICHARD A SANCES, please visit our flower store.