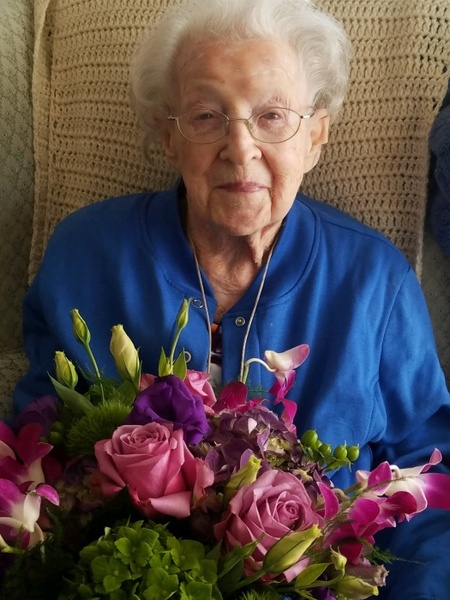 
SKINNER, Mary Elizabeth (Santry) Died peacefully at her home in South Boston on January 20, 2022. She was born in South Boston on April 3, 1919, the daughter of Mary Ellen McDonough and Daniel Stephen Santry. She was married for 45 years to William H. Skinner Jr, who predeceased her on July 6, 1992. After her mother died when Mary was 16 years old, she helped raise her five younger brothers during the 1930's. At the urging of her uncle, Mary then attended Boston Teachers College. After graduating in 1940, she taught in grammar schools in the Boston Public School system throughout the 1940's, until her marriage to William Skinner in 1947. While she raised her three children in the 1950's and 1960's, Mary remained an active member of several parish and civic societies and was a constant help to neighbors and fellow parishioners. She was a strong supporter of her husband as a Scout master at St. Brigid's and during his work with the South Boston Residents Association in the 1970's. Once all her children were in school, Mary returned to teaching in 1967, and taught another generation of young Bostonian's, this time at St. Brigid School on East Broadway, now South Boston Catholic Academy, where she taught for 22 years until she retired in 1989, at age 70. Mary was a lifelong learner who read several books a week, read the newspaper from cover to cover each day, and maintained her boundless curiosity throughout life. On her hundredth birthday in 2019, she celebrated with her family and 100 guests and received blessings from Pope Francis, and proclamations from the Governor of Massachusetts, and the Mayor and City Council of Boston. Mary remained an active member of St. Brigid Parish and was the beloved matriarch of an extended family. She is survived by her three children and their spouses, Mary Ellen Proulx and Dennis Proulx of Taunton, MA, Elizabeth Reilly and Michael Reilly of South Boston, MA, and William Skinner and Murray Jolivette of Washington, D.C.; her beloved grandchildren Jonathan, Michelle, William, Stephen, and Katherine; her great-grandchildren May, August, Daniel and Molly, and many nieces, nephews, and cousins in Boston and around the world. In lieu of flowers, donations may be made to the South Boston Catholic Academy c/o St. Brigid Parish, 841 East Broadway, South Boston, MA 02127. A Viewing will be held at St. Brigid Church, 841 East Broadway, South Boston, MA at 10:30 AM on Saturday, January 22, 2022, followed by a Funeral Mass at 11:30 AM. A Celebration of Mary's Life will be held at a later date, as COVID protocols permit. Visiting Hours: 10:30-11:30 at St. Brigid Church, 841 East Broadway, South Boston. wwww.spencerfuneralservice.com

To order memorial trees or send flowers to the family in memory of MARY ELIZABETH SKINNER, please visit our flower store.