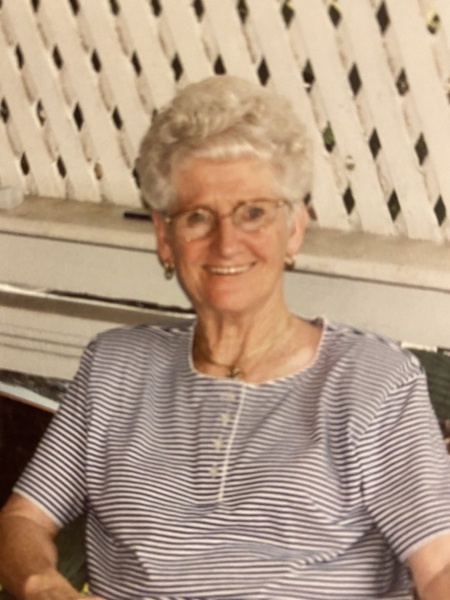 Mary (Sweeney)McGinty, 91 years of age, of Somerville and for long years of Lynn, went home to God early in the morning hours of Saturday, December 12th.  Mary was born as one of the five children of John and Margaret Sweeney in the hamlet of Scotland, in the village of Roos, near the town of Hollymount in County Mayo in the Republic of Ireland on St. Patrick’s Day, March 17, 1929. When her mother died Mary, in her mid-teens, effectively became mother to her sister and brothers as they grew up.  In 1954, she emigrated to the United States, entering at New York’s Ellis Island, and settling in Lynn, Massachusetts.  On June 10, 1956, she and John J. McGinty of Lynn entered the bond of marriage at Saint John’s Church in Swampscott, Massachusetts.  Over 44 years of life together, until her husband Jack’s death in 2000, they bore into the world together 7 children, John, Michael, Joseph, James, Thomas, Terence, and Ann Marie (Collins).  Michael died as an infant and their remaining offspring learned how to live and love in the family home on Eastern Avenue in Lynn, learning that where there is love in the end there is more than enough.  Mary worked outside the home as the children grew toward maturity.  She served as the cook for the Sisters of Saint Joseph in their convent at Swampscott.  She kept clean the homes of many clients in Swampscott and Marblehead.  Many of these became family friends because of the bright smile, the honest speech, and the loving ways of Mary. She and Jack retired to Hudson, New Hampshire in 2000.  Jack died of cancer in August of that same year.  Mary lived in their new house for 14 years, much of that time providing loving care for various groups of her beloved grandchildren.  In December 2014 she became resident at the Jeanne Jugan Residence of the Little Sisters of the Poor in Somerville, which became VNA Senior Living at Highland in August of this year.  The loving care of the Sisters and staff made these years an experience of home.  Mary, with her infectious laughter, her propensity for singing Irish songs aloud, and her loving gratitude to those around her, came to be well-known and loved in the community.  For a good length of time she was often in the foyer of the building, effectively serving as greeter for visitors.  During spring 2020 she tested positive for the novel Coronavirus and survived.  Just days before her death, she tested positive for a second time.  But in fact no virus ever will be victorious over the spirit of Mary McGinty.  She was pre-deceased by her father and mother, her sister Nora Fraser of Lynn, and her brothers Terence, John, and Peter of Ireland and England, her husband John “Jack” McGinty and their son Michael.  She is survived by Joseph and Carol and their son Michael of Portsmouth, NH; by James and Trish and their children Kelly, Erin, Madeline, Molly, and Jack of Baltimore, MD; by Thomas and Debra and their daughters Meghan and Falon of Maryland, Kentucky, New York City and Colorado; by Ann and Andy and their children Courtney, Ryan, Hannah, Daniel and John; by   Attorney Terence McGinty of Warren MA; and by the Rev. John McGinty of Worcester MA.  Services  will be private due to health concerns on Covid-19.  A public celebration of her life and love in God will take place in 2021.  Donations in Mrs. McGinty’s memory may be made to The Little Sisters of the Poor in support of their international care of elders who need a place of safety and love [Provincial Residence. 110-30 221st Street. Queens Village, NY 11429]. Due to Covid 19 restrictions Family members only. The Mass will be livestreamed on Gate of Heaven Parish website  www.gateofheavenstbrigid.org  www.spencerfuneralservice.com

To order memorial trees or send flowers to the family in memory of MARY McGINTY, please visit our flower store.