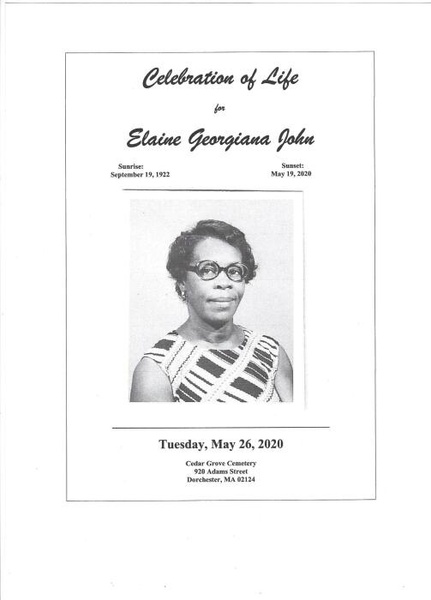 Our mother ELAINE GEORGIANA JOHN came into this world on September 19, 1922, the eldest of three
(3) children born to Irene Dalaway (dec’d). Her sisters are Betty Browne and Annie John (dec’d). Elaine
was raised in Waterloo, Carapichaima, and lived most of her young adult life in Enterprise Village,
Chaguanas. Elaine had a very humble beginning during an era when having a balanced meal and more than
two (2) changes of clothes were luxuries that not many could afford.
Elaine had several pet names, including Titta, Miss Georgie, Miss Elaine. She was an entrepreneur when
that word was not in the language of the people of the island. She was very resourceful and was recognized
for her many creative talents. An excellent self-taught seamstress, she could sew a dress for any occasion
without a pattern [just show her a picture, or as the calypsonian sings, just show her the corner where the
person passed]. She baked and decorated cakes for weddings and christenings or whatever other occasion,
and taught multiple crafts – basket weaving, macramé, paper and fabric flowers. Elaine was talented,
blessed and highly favored.
Miss Georgie had five (5) beautiful daughters: Estella Millard Williams Yallery (Oliver, dec’d), Shirley
John Inda (Paul, dec’d), Myrtle Esdelle John-Frazier (Anthony), Jennifer John Crenshaw (Larry) and
Gwyneth John Kendricks (dec’d) (Roger, dec’d) whom she raised and educated with pride. She taught her
daughters to have respect for themselves and others, and to treat everyone the way they wanted to be
treated themselves. Even though she lacked a high standard of formal education, she worked tirelessly to
ensure that her daughters got a good education so they could avail themselves of opportunities that she did
not have. She impressed upon her daughters that education is the key that unlocks many doors, so it
doesn’t matter what you look like or where you come from if you have knowledge you can go far in life.
Thank You Mom.
Elaine was very fortunate and blessed to have seven (7) grandchildren: Paula Inda (dec’d), Patrice Inda,
Michelle Inda, Dan Inda; Nicole Williams George; Roshia Kendricks and Michael Kendricks, and six (6)
great-grandchildren.
It was widely accepted that Miss Georgie was a person who would come to your aid in times of distress,
but she did not outstay her welcome. When the task was done, she retreated to herself and her daughters,
so some folks thought of her as stand-offish.
After her daughters left the island to pursue their education, Elaine immigrated to the United States of
America and worked in the hospitality industry. She lived close to her daughters in Kansas City, Mo,
Chicago, IL, Denver, CO and spent her later years in Boston, Massachusetts where she lived a quiet life
after retirement. She enjoyed traveling to visit her daughters wherever they were residing, including
Kenya, Africa, or to her beloved Trinidad. Elaine was blessed to visit many places on this earth that many
who came from a life with greater opportunities and abundance than she, have only been able to read about
and imagine.
Elaine will be sorely missed but always remembered by her surviving daughters Estella, Shirley, Myrtle
and Jennifer, her surviving sister Betty Browne; grandchildren Patrice, Michelle, Nicole and Dan, her
great-grandchildren; her nieces Lynda, Marlene & Ena and nephew Carlos; and many friends in Trinidad
and the USA.
As we mourn her loss, let us take solace in her long life, her strength of character, the high regard and
esteem she earned from her family and loved ones, and the grateful thanks of all those who benefited from
her generous and giving spirit. While this may not be the ultimate comfort, let us see her life as one that
was well and fully lived, a blessing to many, and a credit to herself and her family. MAY HER SOUL
REST IN PEACE.

To order memorial trees or send flowers to the family in memory of ELAINE G. JOHN, please visit our flower store.
Send a Sympathy Card